Consultants were paid £51,760 by Wrecsam Council to review leisure provision.

The Sports Consultancy used statistics on usage and costs that were already known to the council through previous reviews, they only carried out a visual survey of the condition of the buildings and came up with options that were blindingly obvious - to save money the council could close Plas Madoc and Waterworld leisure centres.

By the same principle, the council could close every library and community centre and save even more money.

There is the possibility of a new smaller 25-metre pool being built in place of Waterworld but without all the existing features. This would be built on the old police/court complex, which is scheduled to be demolished or moved sometime in the future. The cost of such a new build would be £12 million, to be funded through prudential borrowing at a time when the council is looking to save £9.5m this year. The new build would eat up most of the savings made by closing the two existing leisure centres.

Other elements in the 207-page report refer to setting up an arms' length Leisure Trust to manage existing leisure provision. As many councils already have this kind of set up, a quick Google search by the council's own staff would have enabled them to come up with this proposal.

When will see the council's well-paid senior management team start making decisions themselves and using the people with real knowledge in the field - the staff and service users - to make some really radical decisions. Closing leisure facilities would be a short-sighted decision to save a few hundred thousand pounds - so that more money* can be spent on employing consultants to state the bleeding obvious.

* The current Labour-run council spent £882,000 on consultants in the past year, a £332,000 increase on the previous administration.

Posted by Plaid Whitegate at 12:18 0 comments 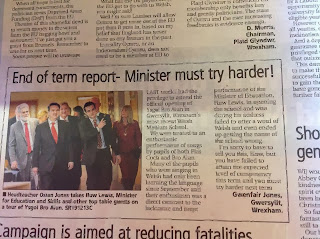 Posted by Plaid Gwersyllt at 13:37 0 comments

Perhaps one of the questions that we should be asking our government here in Wales is, "What are you doing about 'reshoring'?

Yes, I know,  I didn't have a clue what it meant either, until I read this article in The Investor.

Basically reshoring means those companies who have over the last decade or so have 'offshored' their production but who are now returning to the UK because the costs are similar.

One of the companies to 'reshore' are Symington's Golden Wonder who have returned to Leeds and as one of their executives said:


That cost difference has narrowed, ... as pay in developing markets has risen. Wages in China's Coastal areas... have risen 350% in the past 11 years... 'Back in time' Chinese production was 30 to 35% cheaper . Today the company can make noodles in its Leeds factory for roughly the same.

Another company to move home is Caldeira who are moving back to Liverpool after 10 years in China, but what Caldeira are finding is that the skill base for their production workers is no longer there.

Hornby is another company 'reshoring' 10% of its production back to Sussex after closing its Margate factory back in 1999.

So are the Welsh Government actively lobbying those companies who wish to reshore to come to Wales or are they just 'dishing' the money out to facilitate companies moving from one part of Wales to the other
Posted by Plaid Gwersyllt at 17:02 0 comments

Caia Park Community Council has stepped in to save vital community services under threat by county council cuts.
Plans by the Labour-led Wrecsam council to cut key services such as school crossing patrols, play areas and Pentre Gwyn Community Centre meant that Caia Park CC had to take action.
Tonight's community council meeting voted overwhelmingly to maintain these services without increasing the precept - the amount of money charged on people's council tax bills will remain the same.
It's estimated that the £30,000 of extra funding for these services will be found by cutting back on community grants and the environmental budget.
Speaking after the meeting, Cllr Marc Jones - who chairs the meeting - said:


"The community council, after extensive consultation with local people, agreed it would protect much-needed community services such as play areas, lollipop ladies and Pentre Gwyn Community Centre.
"If we had not stepped in, the county council would have closed these facilities and left the community without important services. I'm particularly pleased that councillors backed the decision to keep Pentre Gwyn community centre open as it's the only facility the Whitegate area has - the challenge now is to make sure it works with a new management committee."


The community council decided not to maintain Kingsley Circle community centre due to the estimated £60,000 repairs needed as well as the £15,000 annual deficit.

How safe is Wrecsam hospital's Accident and Emergency service?

Back in July 2013 the North Wales Health Alliance attended a stakeholder meeting organised by Betsi Cadwaladr University Health Board. Among the matters aired was the possibility of removing one of the three A&E services from Bangor, Bodelwyddan or Wrecsam.

One very senior official present argued that it should be Wrecsam because patients could be treated in Chester and the Wirral.

Now the health Minister Mark Drakeford has said that one of the three A&E departments in the north could be downgraded (although he later claimed he meant re-alignment).

This led to a denial by Betsi Cadwaladr's Dr Olwen Williams: “As the minister said, the important thing is that the system works together so that the people of North Wales receive the treatment they need, where and when they need it.

“Let's be clear, at present, there are no plans to change the services at our three A&E units at Ysbyty Gwynedd, Ysbyty Glan Clwyd and Wrexham Maelor.
“We are, however, always looking at ways to improve the quality, safety and sustainability of our clinical services. Over the past 12 months we have held a series of workshops with stakeholders from the voluntary sector, local authorities, staff, the Community Health Council, patient groups and trade unions to help us shape our future strategic plans.
“We are already undertaking a lot of work to improve existing services, including building a state of the art emergency quadrant at Ysbyty Glan Clwyd, redeveloping the A &E building in Ysbyty Gwynedd and upgrading the Minor Injuries Unit at Llandudno Hospital."


Upgrades and new builds in Bangor and Bodelwyddan. No mention of improving Wrecsam.

How safe is Wrecsam's A&E department?

UPDATE: This is a comment on wrexham.com: I'm currently awaiting a very minor outpatients procedure. I was referred to see a consultant by my Wrexham GP. The resulting appointment letter was sent from Countess of Chester. Although I saw the consultant at the Maelor yesterday, the short procedure will be carried out at…The Countess of Chester. So other than the room at the Maelor, where I spoke to the consultant, all my treatment plan is being conducted from Chester!
Posted by Plaid Whitegate at 23:40 0 comments

The people vs the council 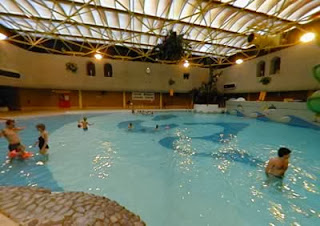 There are four months to go before Wrecsam Council starts its slash and burn approach to frontline services. We have already seen plans to close libraries, community centres, play area and cut school crossing patrols (regardless of their high-risk nature).
Now the council plans to abandon most of its leisure provision, including closing Plas Madoc leisure centre and Waterworld with the "possibility" of opening a new swimming and gym facility on the Waterworld site. Other leisure facilities, such as the Queensway gym, would close and others would be given to schools to run - hitting their budgets.
Schools are not immune from the cuts - despite a growing number of pupils, heads and governors are being asked to make cuts year on year.
Similarly bus services to rural areas are being axed and already hard-pressed social services further pressurised.

Very little, it seems, is escaping this axe. Except the chief executive, the mayor and the many layers of senior managers who seem immune to the cuts. Likewise, the Labour-independent-Tory coalition of councillors running the council hasn't thought to give up their £100,000 a year collective pay rise. There is inefficiency and waste at the top of the tree that isn't being tackled.

Until now the resistance to these cuts has been localised and fragmented. It's been easy to dismiss protests to save a community centre in Whitegate, a library in Rhos, a school crossing patrol on the Holt Road.

But now people understand the extent of what this council is doing - cutting the key services that we pay our taxes and Council Tax for - there is growing opposition.

Facebook pages can be ephemeral things but Save Plas Madoc Leisure Centre  has gained 2023 followers in just a week. This group of local people and users of the pool and leisure facilities have also organised a snap protest tomorrow outside the Guildhall at 1.30pm - just before a scrutiny committee meeting discusses the proposed closures.

Now's the time for people to show their anger with the council for all its short-sighted decisions and offloading of responsibilities.