It is really difficult sometimes to grasp the extent of Welsh Labour's control and pervasive influence over life in Wales and in particular public institutions in Wales. Let's take the example of Andrew Davies.

Andrew Davies used to be a Labour Assembly Member and a Welsh Government Minister until he stood down in 2011.

Having left public life, Andrew Davies was appointed Chair of Abertawe Bro Morgannwg Health Board and also the National Dance Company of Wales.

Both these organisations were recently in the news in Wales for all the wrong reasons.

Firstly an independent report commissioned by the Arts Council of Wales (ACW) into the running of the National Dance Company of Wales found that "the board was unable to function in an appropriate manner" and recommended a new chairman and board of directors was appointed by January 2014.

This crisis in the NDCW continues as it faces an enquiry by the Wales Audit Office into a grant of £40,000 by the ACW and the Chair, Andrew Davies remains in post.

Published on Tuesday, Trusted To Care catalogued a series of failings at both hospitals.It described "a sense of hopelessness" in the care of frail and elderly patients and cited "poor professional behaviour" as well as a "lack of suitably qualified, educated and motivated staff."One patient told the review team: "I am in Hell."

Is there anyone apart from me that think these instances are in fact resignation matters and why hasn't it happened?
Posted by Plaid Gwersyllt at 10:21 0 comments

This underfunding has led to Cardiff University academics calling on Welsh politicians to properly scrutinise the impact of the planned Wrexham ‘super’ prison – a plan which will see the second biggest prison in western Europe due to open in Wales in 2016.

The total cost of primary healthcare for the three public prisons in Wales (HMP Cardiff, HMP Swansea and HMP Usk) in the same period was £3.9 million. This figure excludes the cost of secondary healthcare for prisoners in Wales, for which data is not apparently kept, but which can be expected to add significantly to the total final cost. Research suggests that any additional costs above the £3.4million allocated by a combination of the UK and Welsh Government are born by Local Health Boards from their existing budgets.

Plaid Cymru’s Wrexham spokesperson Carrie Harper said: “The NHS is under huge strain in North Wales at the moment with a projected overspend of £35m this year. These new figures show that the planned new Wrexham super prison, the second largest jail in Europe, will place even more strain on our health services and could cost millions to the local NHS.
“It’s a scandal that the UK Government doesn’t fully fund this non-devolved issue and expects us to pay for the health care of prisoners, most of whom will be shipped into Wales.
“Plaid Cymru has expressed doubts about the size and scale of this prison, which is likely to be privately run. We recognise the need for a smaller prison that serves the North Wales region and would include facilities for youth and female offenders, who are currently dispersed all over the UK.
“Rather than raise concerns about the naming of the institution, our local MP would be better off campaigning for proper funding from London for the health care this not-so-super prison will require.”

These findings have led to academics at Cardiff University to call on Welsh politicians to carefully scrutinise the plans for the planned Wrexham “super” prison and its likely impact on health budgets in Wales, and in north Wales in particular.

Robert Jones, a research associate at the Wales Governance Centre at Cardiff University who is undertaking the research said: “This research shows that even before the Wrexham ‘super’ prison has been built, prisoner healthcare in Wales is already being underfunded. The fact that the Welsh Government does not hold information on the costs of prisoner healthcare in Wales raises some very real questions over the extent to which such services are being effectively scrutinised and accounted for.

In addition to Mr Jones’s comments, further calls to consider the wider costs/impact associated with the Wrexham ‘super’ prison have also been made by a leading economist in Wales.

Professor Max Munday, Director of the Wales Economy Research Unit at Cardiff University, said,
“Whilst there may be additional local employment created by both the development and operation of a new prison, it is important to recognise that there is the potential for a series of more subtle socio-economic costs to arise from the presence of such a facility. For example, the presence of a large prison could have effects on house values locally, and could impact efforts to market the wider area to inward investing companies.

“In addition a complete analysis of moves towards a super prison needs to account for welfare effects on inmates and their families, for example, in terms of increased visitor/family travel time, and possibly reduced numbers of visits. Unfortunately some of the more subtle costs of such developments can be hidden where the focus is on simple employment creation.”

3.      Full summary of the research findings are here:

·         The UK government provided the Welsh government a total £2.544 million for prisoner healthcare.

Posted by Plaid Whitegate at 15:26 0 comments 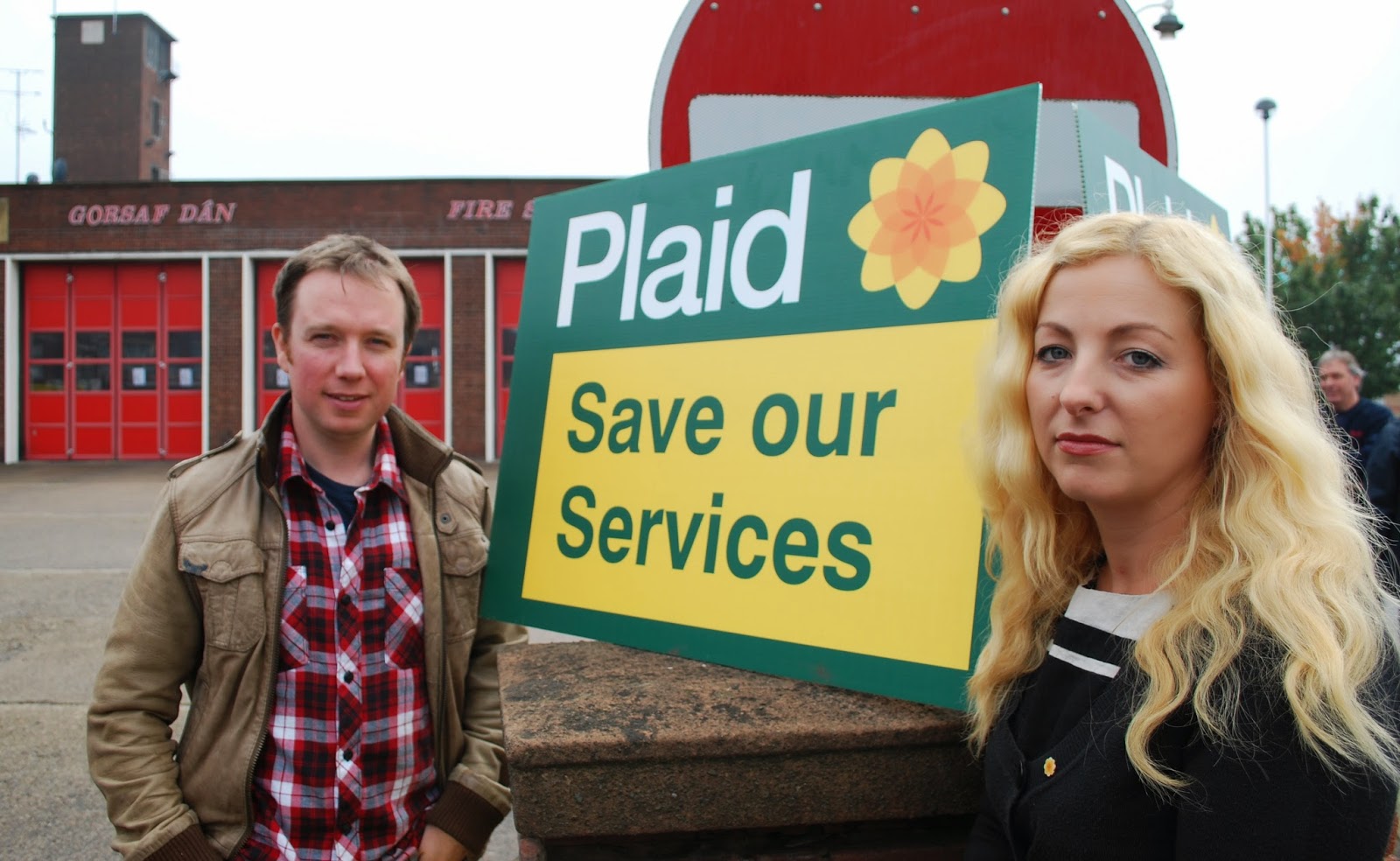 Wrexham Labour Council has been accused of stashing money away in reserves while cutting vital frontline services. The decision has been branded a scandal by local Plaid Cymru campaigners.
Plaid Cymru’s Clwyd South spokesperson Mabon ap Gwynfor said campaigners against the closure of Plas Madoc Leisure Centre, libraries, community centres, bus services and the reduction of grass cutting would be horrified to learn that the council had enjoyed two unexpected windfalls recently.
In the first instance it had an underspend of £1.5 million against its anticipated budget for 2013-4 – including an unexpected additional £200,000 extra tax income.
Mr ap Gwynfor said:

“There’s been a lot of hand wringing by Labour councillors about the lack of money to run frontline services but we now find that they are able to salt away this unexpected windfall. That is little comfort to people who relied on bus services, community centres, leisure services and libraries that have all had their funding brutally cut. In some cases community councils or local voluntary groups have taken over these services but many have also been lost to the community.“A cynic would say that Labour is cutting hard now in the hope that people will forget when the next council election comes around in 2017. I have to say that people are incredibly angry with the way the council is allocating funding from its £200m budget and ignoring the wishes of the wider population. I don’t believe they will forget what this council had done in a hurry.”

Another unexpected windfall came in the shape of an underspend in the Equal Pay settlement to female workers at the council. Like other councils, Wrexham had put aside money – more than £6m – to settle the long-standing legal battle. However, when it was finally settled the total bill only came to £4m. The additional £2.2m has again largely been put into reserves.
Cllr Carrie Harper, Plaid Cymru’s Wrecsam spokesperson, said:

“Everyone is aware that UK Government cuts have had an impact on council spending and Plaid Cymru is opposed to the idea that frontline services for some of our poorest communities should be cut to pay for the bankers’ bailout and tax cuts for millionaires.

"But this Labour Council can’t escape the blame for cutting certain services when it knew there were millions of pounds of extra income coming in. How difficult would it have been for the Executive Board to keep Plas Madoc open for another year while the Splash Community Trust was established? Instead they have chosen to maximise the misery by axeing key services now without giving communities a fighting chance to find alternative ways  to keep services going.

"Future funding for key social services such as respite care is now facing the axe in the coming year, causing real stress for families who rely on that service.“To discover that there is extra money in the pot, as well as the perverse decision to keep on funding a mayor during this unprecedented period of cuts, is a scandal. Community councils and voluntary groups have stepped into the breach in many instances but many people are left asking what exactly our county council is for if it is not delivering those services? 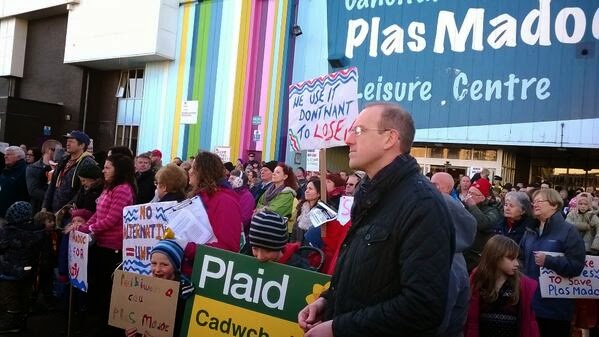 Posted by Plaid Whitegate at 22:51 0 comments