Fair play for the North: Fund the Racecourse regeneration! 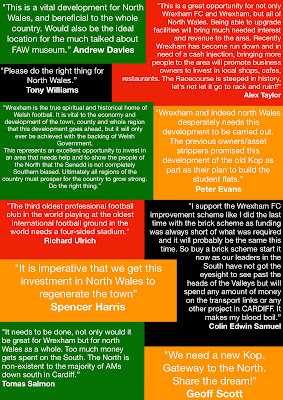 Support for funding the redevelopment of the Racecourse has snowballed over the weekend with more than a thousand people supporting a petition to Welsh Government.

Plaid Cymru Councillor Carrie Harper, who launched the petition on the back of an announcement in principle last week, said:

"The news last week was a step forward both for the Racecourse and the wider area of Crispin Lane and the railway station. But at the moment they are just aspirations and plans - to make them a reality will take money and a political commitment to invest in this part of Wales.

"It's clear from many of the comments on the petition that many signatories want to see investment from this Labour government more equally spread throughout the country. Time after time, people comment that this would not have taken so long to happen if it had been 'down South'. There's a clear perception, something that's backed up by facts, that the North isn't getting its fair share when it comes to capital spending.

"Whether it's the South Wales Metro, the new convention centre at Newport or funding for yet more conferencing facilities in Cardiff, there's a real danger we are seeing an overconcentration of funding in the south-east corner of Wales. We need some 'chwarae teg', some fair play for the North."

Fellow councillor Marc Jones, who represents the Grosvenor ward surrounding the Racecourse, stressed the need to find the funding after years of broken promises:

"As far back as 2006, we had Labour minister promising 'the Millenium Stadium of the North' and nothing came of it.

"The purpose of the petition is to ensure this scheme is delivered - for the good of the club, the stadium, the town and the wider region. If this scheme is to work it needs proper funding and that's where the Welsh Government has to step up to the plate. I'd urge people to sign the petition HERE to get the job done.

"We'll also be collecting names for the petition outside the friendly against Stoke and the opening match of the season on 3rd August."