A new report to Betsi Cadwaladr health board reveals that more than a quarter of nurses in the region are over 55 and therefore approaching retirement.
The health board has failed to train, retain and recruit enough staff across the board but the problem is particularly acute in nursing and midwifery, where there is a 11.8% vacancy rate.
The failure of workforce planning over a decade has led to the current crisis, which is being compounded by stupid proposals to extend nursing shifts without extra pay.
Many nurses retire before they reach pensionable age due to the stress and strain of the job, having worked shifts and nights for 40 years or more.
This is a general problem in the NHS and will be made all the worse if Brexit forces out EU staff. However, the problem is particularly acute in BCUHB because senior management and the Labour Government in Cardiff have failed to address the situation beyond temporary recruitment drives abroad. For a time they even banned nurses who were training in Glyndwr University from getting placements in Wrexham Maelor Hospital!
Back in January 2014 Plaid Cymru's Leanne Wood unveiled plans to train and recruit 1,000 doctors and 5,000 nurses to safeguard the NHS in Wales. If that had happened back then, we would be in a far better place than we are now. The drift and failure of the current Labour Government in Cardiff is endangering our health service. That's why we need change at all levels. 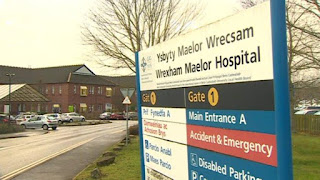