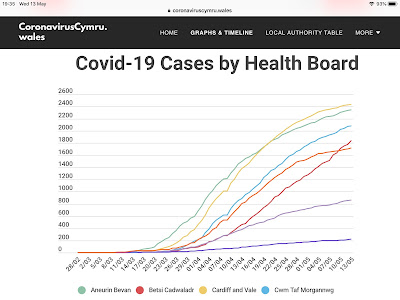 MOST WELSH COVID-19 CASES NOW IN THE NORTH

This is a graph that reveals the striking rise of the Covid-19 virus in north Wales.

More than half of all new cases throughout Wales are now in north Wales (which has just 23% of the total population).

Llyr Gruffydd, Plaid Cymru's North Wales MS, said the rise in the proportion of confirmed cases in the North compared to the rest of Wales is a matter of huge concern:

"It reinforces the point Plaid Cymru has been making for the past week that, in contrast to areas around Cardiff and Newport, the North has yet to hit a peak. It's vitally important that this key message informs the political decisions being made in Cardiff.

"It seems the UK Government is taking a London-centric view and because the peak arrived earlier there than elsewhere in the UK is relaxing the lockdown too soon. We must avoid making the same mistake in Wales.

"Our research shows that the R value in the North is still around R1 and therefore the virus is still spreading. If it rises to R1.1 then that could mean an additional 2240 deaths over the next three months in the North alone.

"Lifting or easing the lockdown too quickly will mean the virus re-igniting in our communities. The danger that poses when we already have an over-stretched and under-staffed health board does not bear thinking about."

For daily Covid-19 updates go to https://coronaviruscymru.wales/ from where the graph was taken. Diolch i @LloydCymru am ei waith.
Posted by PlaidRhosddu at 20:13