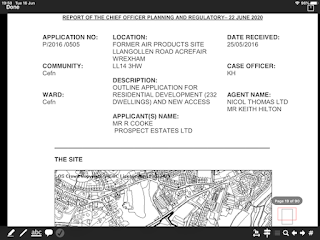 The old Air Products factory site in Cefn Mawr was granted planning permission for 232 houses in 2018. This was on condition that a quarter of the homes were affordable (i.e. for sale below market value) and a significant contribution was made towards local schools as a result of the increase in children.
Now the owners of the site - Yorkshire-based Prospect Estates Ltd - are trying to amend the planning permission to allow them to sell the land to a housing developer without either obligation. This will put an extra few million pounds in the developer's pocket.
At present, any housing development over 25 homes has to have an affordable percentage of 25% under the council's existing UDP.
Remarkably, the council's own housing chief Lawrence Isted is recommending that councillors ignore that policy to ensure developers make a profit. This is done through a viability assessment that normally factors in profits of between 16-20% per house.
Mr Isted is also ignoring pleas from the local community council and his own education department, who have pointed out that local schools are already full. This development, if permitted, would probably mean an extra 50 primary school age children.
Under the existing permission, the developer would be expected to pay about £500,000 towards additional school places. If permission is granted, that money would have to come from council coffers or we will see local children unable to get places in surrounding schools.
This is not the first time that developers have got outline planning permission by promising to contribute towards schools and affordable housing before seeking to move the goalposts. A cynic might say they know exactly what they're doing.
Wrexham Council's draft Local Development Plan has already slashed the number of affordable houses planned for the coming decade. This proposal by officers underlines the lack of commitment to affordable housing in the borough.
Posted by PlaidRhosddu at 16:46