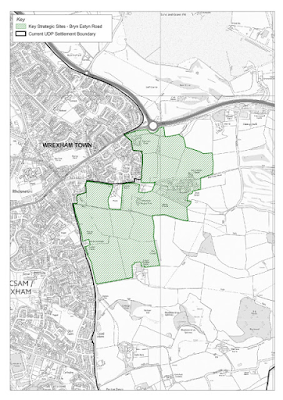 Plaid Cymru has called for an apology from Wrexham's council leader after a surprise u-turn by his Independent group of councillors in Wrexham over the Local Development Plan.
The Local Development Plan allocates land for various uses, including employment and housing, over a 15-year period and it's the latter that has proved to be most contentious with the original LDP being thrown out. Welsh Government subsequently insisted on more land being allocated for a greater number of houses over the plan period of 2013-28 and that became the basis for this second LDP.
Plaid Cymru has consistently opposed the premise of the plan for over a decade due to the housing numbers being largely driven by demand from the north-west of England rather than from Wrexham itself.
Now, in an unexpected twist, the council's Leader Mark Pritchard has told the media that his group is withdrawing its support from the LDP. It's a move that's been welcomed by the Plaid Cymru group on the council. Councillors Carrie Harper, Marc Jones, Gwenfair Jones and Phil Rees had submitted a motion to December's full council meeting calling for the withdrawal of Wrexham Council's support for the LDP due to a number of issues.
Cllr Harper said:

"Our motion called for the withdrawal of support for what we consider to be a flawed Local Development Plan that's been forced on local communities. We don't believe it meets the needs of Wrexham people. It's based on flawed population projections that don't reflect the reality and it's also halved the number of affordable housing. The LDP allocated huge swathes of greenfield sites for development of large commuter estates and we thought that was unacceptable for so many reasons.
"From the outset we as a group have argued that we should be building and planning for people's needs rather than what developers want. We have been consistent in opposing it. The same can't be said for the ruling coalition, which two years ago put a lot of pressure on councillors to allow this plan to go forward for inspection. Back in October 2018 we argued that councillors giving the plan the thumbs up was a mistake.
"Where were these councillors two years ago when it was clearly the case that Wrexham's population wasn't growing to the same extent as envisaged? Where were they in opposing the destruction of our environment and concerned about the additional pressures on over-stretched services? Where were they fighting for more - not less - affordable homes?"

She said Wrexham now faced the prospect of planning being taken out of its hands completely by the Planning Inspectorate:

"It's embarrassing, frankly, that Wrexham is the only council in Wales to have its LDP refused once and now faces having it refused again. The buck has to stop with someone and that should be the council leader, who has been a strong advocate of this plan from the outset.
"He should now apologise to the people of Wrexham for allowing this LDP to go as far as it has done. Wrexham deserves better than this - we need a change of council leadership and the sooner that happens, the better."

Please note that the following Motion, submitted by the undersigned, will be considered at the next Ordinary Meeting of Council, to be held on 16 December 2020.
“This Council resolves to:
- Withdraw its support for the deposit Local Development Plan (as passed on 22 November 2018 by Wrexham CBC) as it no longer meet the needs of Wrexham's communities in light of recent available data for the County Borough.