New bid to presume against fracking in Wales 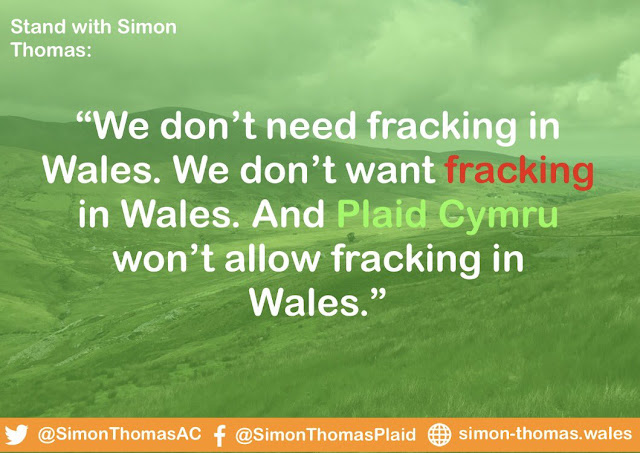 Wrexham councillor Carrie Harper has welcomed news that Plaid Cymru’s Simon Thomas is putting forward a new legislative bid to ensure a presumption again fracking in Wales.
Mid and West AM Simon Thomas is moving a Member's Legislative Proposal in the Senedd today.

“Plaid Cymru is calling on the Labour Government to commit to a precautionary approach to unconventional gas activity, including opposing fracking“Next year we get the powers in the Assembly to ban fracking. I will be leading a legislative debate in the Assembly to do just that.“We don’t need fracking in Wales. We don’t want fracking in Wales. And Plaid Cymru won’t allow fracking in Wales.“Fracking is the old way of doing things. It’s time to throw out the solutions of the past.”“Instead we should amend land use planning legislation to fast track community owned energy schemes, with a presumption in favour of development.“A Plaid Cymru Welsh Government would ensure resources from Wales are used sustainably, to tackle climate change and develop a post carbon economy.“We would transform our energy policy to place the interests of Welsh communities at the heart of everything we do.”

"Fracking and other unconventional gas and oil drilling is something that's been of concern to people in Wrexham since a licence was granted to test drill in the Borras area. There was strong opposition from local residents and anti-fracking campaigners that saw a camp being set up to oppose the threat to our water, safety and environment.

"I'm glad a Plaid Cymru AM is aiming to strengthen the legal position of the Assembly to ensure we don't see this threat emerging again."

Posted by Plaid Whitegate at 15:38