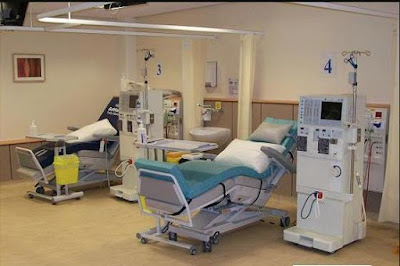 Wrexham's Renal and Dialysis Unit could be run by private company


The First Minister has been challenged to prevent further privatisation of key NHS services in Wales.
The challenge by Plaid Cymru comes days before a key meeting of Betsi Cadwaladr University Health Board to decide on whether to keep Wrexham hospital’s renal and dialysis unit within the NHS or put it out to private contract.
A letter from First Minister Carwyn Jones to Plaid Cymru’s shadow health secretary Rhun ap Iorwerth has not allayed concerns.
It states: “It should be noted that privatisation is not the intention of the tendering process and, in contrast to the situation in England, privatising the NHS is not one of the ideological aims of the Welsh Government”.
Rhun ap Iorwerth responded by saying:


"This is a very strange response given that privatisation of renal and dialysis services has taken place over recent years under this Labour Government. Services in Ysbyty Gwynedd and Ysbyty Glan Clwyd are already run by private companies and the fear amongst staff in Wrexham is that the same is about to happen to them.

“The First Minister suggests he’s not pursuing a privatisation agenda, but seems happy to let it happen ‘by accident’ somehow. I’m not sure if that’s any better. It’s certainly far from reassuring.

“There is no excuse – Betsi Cadwaladr has been under the direct control of the Labour Government for the past three years, with health in Wales run by Labour for the past 19 years. If privatisation is not the intention, it has increasingly been the outcome. It raises questions about whether the Government actually realises what’s going on in our NHS and, if so, why it hasn’t done more to ensure key services remain within the NHS.”


Llyr Gruffydd, Plaid Cymru's North Wales AM, first raised concerns about the tendering process for the renal and dialysis service in January. He said:

"Concerned staff have told me that they do not want to see the service go outside the NHS. We're seeing the same process here as is happening in England, where health services are being privatised step by step.

"The only difference is that the Tories are doing it openly while Labour in Wales is trying to pretend that it isn't happening. But we know it is and this Government must take responsibility. I would urge the First Minister to intervene to ensure this important and much-respected service in Wrexham remains within the NHS."