Maesydre by-election win for Becca and Plaid a 'stunning breakthrough' 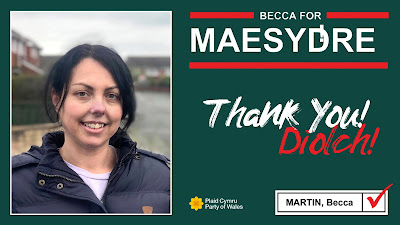 Plaid Cymru's by-election win in Wrexham's Maesydre ward has been hailed as a "stunning breakthrough".

"I'm really grateful that the people of Maesydre have put their faith in me. There's a lot of work to do now in terms of improving both the Maesydre area and the wider county borough - I can't wait to get started. I'm particularly thankful to everyone who publicly backed me in the election and for the Plaid Cymru team who helped make this a success.
"Maesydre will now have a voice in the Guildhall and I look forward to being able to meet and represent everyone in the area over the coming months."

"It's a stunning breakthrough in a ward Plaid has never contested before. Becca was an excellent candidate and will be a valuable addition to the Plaid Wrecsam team on the council. It's great that a young woman has been elected as we urgently need to rebalance the council to better represent the population it serves.
"There aren't enough women or younger people on the council and I hope Becca's election will encourage others to come forward to stand in the 2022 elections. Plaid now has a majority of women councillors locally and this victory for Becca a real step in the right direction.

"Coupled with Phil Rees's by-election win a year ago in Gwersyllt North, we're now seeing Plaid emerging as a genuine contender for power in Wrexham ahead of both Labour and Tory. Whether that's in May's Senedd election or the full council elections in a year's time, we're gearing up for the challenge." 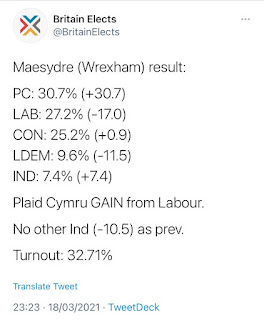